Tough-talking Kakamega Senator, MALALA, now changes tune and begs MUDAVADI for forgiveness after he was kicked out of ANC for supporting RAILA 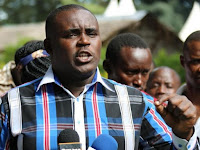 Speaking on Radio Citizen, Malala expressed regret in the way he had responded to the suspension and admitted that there was so much anger in the air that he had not reached out to his party leader to attempt to mend bridges.

"I will go to Mudavadi as his son once everything cools down and we will talk and solve this issue.”

“There are, however, some individuals in the party who are fanning the disagreement by issuing statements to the press," Malala revealed.

This was in contradiction to his statements on November 16th, where he launched an angry tirade at the ANC party leader daring him to expel him from the party.

"I, therefore, as the senator for Kakamega County, dare the party leadership to complete the expulsion process they have started, I am ready to be expelled from the party, I'm ready for a by-election and I'm confident that I will capture back the seat with a landslide," he stated.