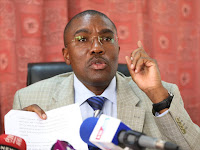 This was revealed by former Mukurwe-ini Member of Parliament, Kabando Wa Kabando, who urged the President to go ahead and sack his Ministers.

Kabando argued that citizens are going through hard economic times and have given up on the Uhuru-led Jubilee administration, and, therefore, it was crucial for the Head of State to put his house in order.

In a post on Thursday night, the vocal politician claimed there were senior Government officials out to sabotage the Government and warned that Uhuru risks becoming a lame-duck President if he fails to send them home.
"Mr. President Sir, let no charlatan or lackey lie to you. This country is bleeding economically. Kenyans everywhere are angry, frustrated and desperate. Dissolve your entire cabinet and start afresh.  You’re the boss with SWORD, crash saboteurs. They’re making you lame-duck," he posted.

Kabando, who is allied to the Kieleweke group, claimed that during the recent Sagana meeting between Uhuru and Mt Kenya leaders, he was informed that everything was not going well in his Government, and they pointed out at some corruption scandals which have occurred during his tenure.

He also said that the war on graft has failed because there were people in Government sabotaging institutions mandated to end it such as the Directorate of Criminal Investigations (DCI), Office of Director of Public Prosecutions (ODPP) and Ethics and Anti-Corruption Commission (EACC).