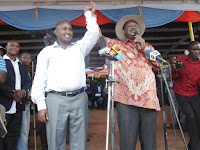 Wednesday November 6, 2019 - Lawyer Ahmednasir Abdullahi has dismissed Suna East MP, Junet Mohamed, as a liar with just under 20 hours before the Kibra poll.

Last week, Junet said Ruto was in talks with a top NASA affiliate party for a possible withdrawal of candidate from the by-election in favour of Jubilee candidate, McDonald Mariga.

"The DP is negotiating with one of the NASA affiliate parties to step down their candidate For Mariga.”

“The amount demanded is huge and hence the negotiations taking a bit long… we shall update Kenyans when the deal is done. Transactional advisor," he claimed.

But until now, no party has withdrawn from the race.

On Wednesday, Ahmednasir took a swipe at Junet, who doubles up as ODM's Director of Elections, accusing him of lying to the public about Ruto's plans.

"So this was a LIE...Hon @JunetMohamed ....just the usual lies from ODM...on the eve of election no one has withdrawn," wrote the Senior Counsel.

While Odinga is reportedly using the race to cement new partnerships with like-minded parties, Ruto wants to show that he can campaign anywhere.