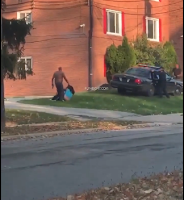 Thursday, November 7, 2019 - This randy guy was shot by cops while attempting to rape a lady in broad daylight.

From the disturbing video, the alleged rapist, who was armed, is seen dragging the woman’s hair and assaulting her.

According to reports, cops were called to the scene to investigate a "rape in progress" inside a public housing project in East Cleveland.

When police arrived, they tried to tell the man to drop the gun, but he refused.

The cops then fired multiple shots at the suspect, killing him on the scene.

The woman who was believed to have gotten injured during the incident was rushed to the hospital for treatment.