Wednesday, November 6, 2019 - Six family members have died in a grisly road accident along the Nairobi-Nakuru Highway.

According to reports, the six victims were travelling to Naivasha for a relative’s funeral when their car collided with a truck.

Five died on the spot while one person succumbed to injuries in hospital while receiving treatment.

Martin Ndung’u, a relative said, “I have lost my sister and two nieces, while the others are my cousins and a grandson, who were all in the vehicle.”

"This is a very painful moment for the family, but we are praying for strength as we prepare to lay them to rest."

Naivasha Deputy OCPD, John Kwasa, said the driver of the saloon car was overtaking a long queue of vehicles when the car was hit by the two trailers.

A recent survey conducted by the National Transport and Safety Authority (NTSA) revealed that the number of people killed in road accidents in Kenya has gone up by 16.1 percent over the last nine months compared to a similar period last year.

The reports also indicated that private vehicles were involved in most road accidents, accounting for 650 fatalities followed by commercial vehicles with 573 deaths in the period under review.

Below is the mangled car they were travelling in. 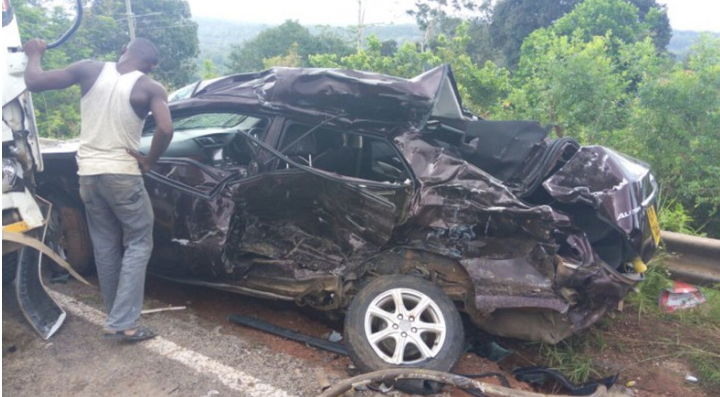