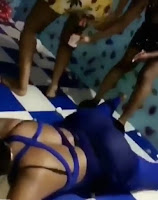 Wednesday, November 27, 2019 - Last week, police raised a lavish apartment in Ruaka that had been turned into a brothel.

Inside the brothel that is located 200 metres from Ruaka Shopping Centre and which is owned by former Sports Cabinet Secretary, Rashid Echesa, about 10 underage girls were arrested by detectives after they were caught engaging in prostitution.

Some were even busted live servicing clients when detectives raided the brothel.

A form 2 student was among the girls arrested after detectives stormed the brothel that has been in operation for almost a year.
Well known blogger X-Tian Dela is in possession of videos showing the happenings inside the brothel that is owned by the former Sports CS. 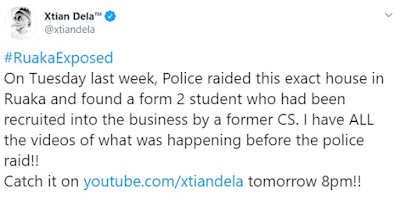 Watch part of the shocking video.
The Kenyan DAILY POST