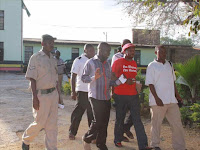 Sunday November 24, 2019 - Shimo La Tewa Maximum Prison has written to Nairobi Governor, Mike Sonko, ordering him to report to jail as fast as possible to finish his remaining jail term.

According to documents seen by our team, the Mombasa based penitentiary, urged the corrupt Governor to go back to the institution and finish his sentence.

Being unable to raise the fine, he was committed to Shimo la Tewa to serve his custodial sentence.

However, he appeared to have mysteriously left the facility on April 16, 1998, a month after his incarceration.

The prison and Ethics and Anti-Corruption Commission (EACC) wants the Governor to report back to prison and finish the remaining term or be charged afresh.

However, Sonko through his lawyers said he is innocent and claimed that EACC and Shimo La Tewa Prison are working with powerful cartels in Nairobi to ensure that he is incarcerated.