See what KHALWALE has said about AMOS WAKO after he was barred from entering the US for life? You will not support BBI after this 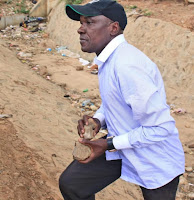 In a tweet on Tuesday, Khalwale revisited attempts to change the Constitution in 2005, in which Mwai Kibaki's administration discarded the Bomas Draft for the controversial Kilifi Draft.

As State Attorney, Wako was the advisor of the Government at that time.

The government lost in its quest to adopt the Kilifi Draft which was rejected by Raila Odinga's team.
With Wako now serving in the Building Bridges Initiative, Khalwale has asked Kenyans to reject the document once it's out, claiming that it's serving few people's interests.

"In 2005, Amos Wako, then AG, mutilated the Bomas Draft into the Kilifi Draft that divided Kenyans down the middle."

"Today he is at it again through the BBI."

"All Kenyans must unite & reject any divisive constitutional amendments meant to serve the political greed of a few Kenyans," he said.

On Monday, the United States of America designated Wako over significant corruption claims.