See how RUTO is planning to defeat BBI! No wonder UHURU and RUTO are wetting their pants as we speak 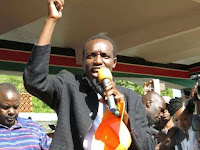 Speaking yesterday, Arati claimed that Raila Odinga, feared to face off Deputy President William Ruto in Parliament in the struggle to have the Building Bridges Initiative report implemented because the DP will bribe the MPs to vote in his favour.

He reiterated Odinga's sentiments on submitting the BBI to a referendum. MPs are torn between the decision to pass the proposals in Parliament or through a public vote.
“There is a problem, let us agree.”

“There is nothing you are telling us that we are going to Parliament to discuss the BBI report.”

“We know very well that William Samoei Ruto will buy all MPs and they will cause a problem in this country.”

"The only court we will get justice is at the common mwanachi," Arati spoke.

Raila has asked his party's MPs not to think about hijacking the document, which he believes belongs to the people.