RUTO was locked out of the VIP room where UHURU and RAILA met after the BBI launch - He was treated like a small boy (VIDEO). 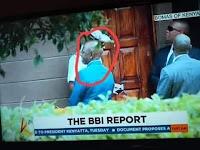 Thursday, November 28, 2019 - Deputy President William Ruto was humiliated after the BBI launch at Bomas Of Kenya after he was locked out of the VIP room where President Uhuru Kenyatta was meeting with Raila.

A video that has surfaced online shows Ruto looking disturbed outside the VIP room where Raila and Uhuru were meeting after the President’s handlers allegedly locked him out of the meeting.
Anger was written all over his face after suffering the humiliation.

The DP looked like a lonely man who had been cornered by powerful men in Uhuru’s office.