RUTO now warns KRA Director-General, JAMES MBURU, not to dare go after him for tax evasion and this is why 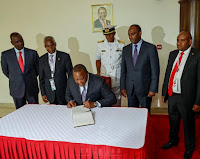 Tuesday November 5, 2019-Deputy President William Ruto on Tuesday left the audience in laughter during the Taxpayers Awards at Safari Park Hotel in Nairobi, when he decided to speak about the status of his tax compliance.

The DP pleaded with KRA Commissioner-General not to go after him for tax evasion because he is tax compliance.

" At one point, I thought I had excelled in paying taxes, and maybe I did, but still, I went back and checked my tax compliance certificate and I want to assure the commissioner-general that I have one so don't come after me," Ruto told KRA's James Mburu.

The DP stated that Kenya was a democracy and that everyone had the freedom to make choices but could choose not to pay tax.

"And because of that, the paying of taxes by all of us is not something we choose but it is something we must do if we have to secure our independence and our democracy," the DP declared.

Ruto then turned his attention to KRA Chairman Francis Muthaura, congratulating him for the fact that under his watch, the country's tax collection had increased.