RED ALERT! These are dangerous conmen preying on innocent Kenyans - One drives a black BMW and hangs around Southern Sun Mayfair (PHOTOs)

I was conned by this group of conmen in July/August of over a million shillings. In hindsight of course I was pretty stupid, but here's a warning in case they trick someone else. They pose as businessmen with various deals for supplying goods to companies.

They mostly target businesspeople who may be going through lean times, with the promise of deals that can recapitalize your business.

Evans Kimathi Akwalo (alias Ninja) drives a black BMW 320i and hangs around Southern Sun Mayfair. He poses as the wealthy connected guy, and even pays for meals and drinks. He claims to work for Royal Mint (K) Limited which is usually the company that is being supplied to.

They have letterheads and so on, but you never get to see the actual company. Neo Nicholas Nzambu (studied at South Eastern Kenya University - admission number X75/0570/2011) also poses as an employee of Royal Mint. They are the ones who collected most of the money. The payout never happens, they just continuously create new 'problems' that need more money to solve. From additional hiring of equipment to access cards, there's always one more thing standing between me and a large payout.

Dan Musau Mutunga and Andrew Kimani are like brokers, they bring in victims, posing as hustlers. After I discovered there was no business and it was all a con, they all disappeared...no longer answering phones.

I reported this matter to Gigiri Police Station - OB Number is 27/15/08/2019 - and worked with Nelson Nyabiba, a CID officer to track them. When contacted by the police they do not deny receiving the money (for which I have MPESA and bank transfer details, plus witnesses where cash was paid), but they have so far avoided capture.
As I continue with this case, I'm also running a petition to get the police to move faster on this case: 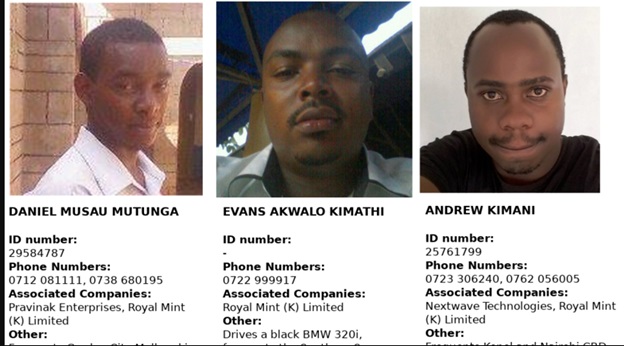