Friday, November 22, 2019 - Raila Odinga Junior broke his silence on Friday morning and hit out at controversial exiled lawyer, Miguna Miguna, over remarks he made last month regarding his family.

In October 17th, Miguna, took to twitter to claim that ODM leader, Raila Odinga, is not the biological father of his children with Ida.

It all started after the vocal defunct NRM General responded to an old tweet where Junior stated that Nairobi city should not have been a County but a Metropolis.

"Now in my opinion NAIROBI should never have been a County but rather it should be a Metropolis and Lavington-Kileleshwa, Westlands Langata, Eastleigh, Dagoreti N/S among others should be different boroughs it’s about the best means of distributing services to the communities #BBi," Junior’s tweet read.
In his typical abrasive manner, Miguna dismissed the young Raila’s recommendations stating that he’s a clueless as his father.

Junior hit-back reminding Miguna about his early claims that Raila Odinga is not his biological father.

See the exchange below. 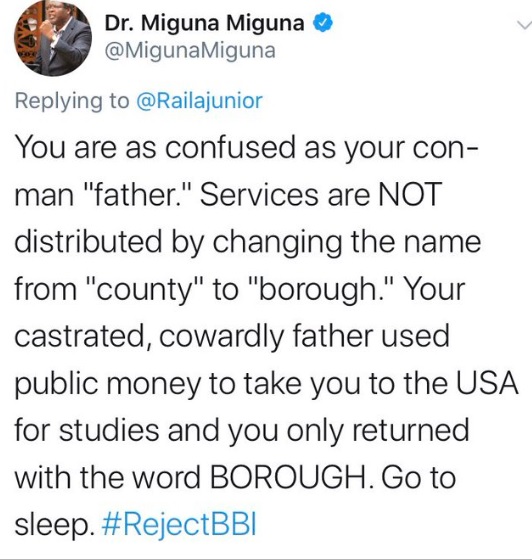