0 Featured Articles, Forum and discussion, Lifestyle 06:58
A+ A-
Print Email 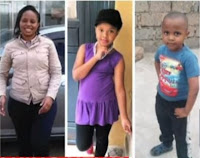 According to an autopsy done by Chief Government Pathologist, Johansen Oduor, Syombua died after suffering injuries to the head from a blunt object while the two children were strangled using a rope.

The three bodies were found buried in a shallow grave at Thingithu Estate in Nanyuki on Saturday evening.

Syombua’s estranged husband, Peter Mugure, a KDF Major based in Nanyuki Airbase is the main suspect in the triple homicide.

On Monday, the Department of Defence (DOD) announced that they have interdicted Major Mugure and he will now face murder charges as a common mwananchi (Raiyaa).

Mugure, 34, was arrested last week and was arraigned in court on Monday as a civilian and not as military personnel.
Close family members said Mugure killed the three because the high court ordered him to pay for Sh75,000 monthly child support after his marriage to Syombua hit a dead end five years ago.

According to a police report, Mugure had paid the money for only three months but he had been complaining to friends about the court order.

Mugure is currently being held in police custody alongside a casual labourer identified as Collins Pamba, who is said to have helped him dispose the bodies.