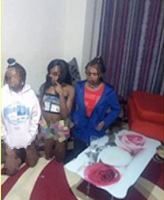 The brothel is believed to be owned by a group of prominent personalities including former Cabinet Secretary in Uhuru/ Ruto's Government, Rashid Echesa.

According to reports, one of the girls rescued in the operation, is a form two student in a School in Kiambu County who had disappeared from school two months ago.

The girls revealed that they could have sex with close to 10 men a day in the brothel and at times the proprietors would ferry them to clients' place of choice using private cars.

Police also recovered sex toys and unused condoms in the house located on the seventh floor of a nine storey building that is about 20 meters from Ruaka Shopping Center.

When undercover officers raided the brothel whose rent is Sh 60, 000 a month, they found some of the girls having sex with clients.

Three suspects were arrested including a 44-year old man thought to be the manager of the brothel.

While the name of the former Cabinet Secretary thought to be part of the owners of the brothel was not revealed immediately, speculation is rife with Kenyans pointing fingers at Rashid Echesa.

The former Sports CS was once accused of being part of a sex trafficking ring after he gave ‘work permits’ to 8 Pakistan girls who were later found working as strippers in a popular club in Parklands Nairobi.