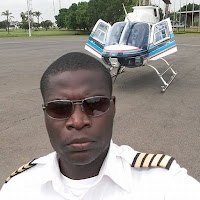 Wednesday November 20, 2019 - Transport Cabinet Secretary, James Macharia, has said the pilot flying the helicopter carrying Nakuru Senator, Susan Kihika’s communication team that crashed into Lake Nakuru in 2017, was under the influence of alcohol.

In a report that he released on Wednesday, Macharia said “the helicopter collided with the water surface due to loss of situation awareness by the pilot, who was under the influence of alcohol as depicted from the toxicology results”.

Macharia said the pilot, captain Apollo Malowa, failed to recognise the loss of altitude, excessive banking to the left and obstacle proximity from the aircraft
The bodies of Captain Malowa, Ms Veronicah Muthoni and Anthony Kipyegon were retrieved after a 25 day of search and rescue.

The bodies of Mr Sam Gitau and Mr John Mapozi - both part of Ms Kihika’s communication team - were never found.

During his burial in Lenya village in Bondo sub-county, Malowa’s mother, Dorothy Malowa, described her son as a hardworking, disciplined and honest young man who had a promising career and future.