“My privates are washed with expensive Soap,” Socialite BRIDGET ACHIENG on why she opens her legs for rich men only. 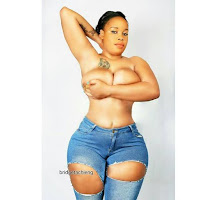 Friday, November 8, 2019- Kenyan socialite and actress, Bridget Achieng has hit out at those calling her a prostitute for sleeping around with rich men stating that her her private parts are expensive.

Responding to her critics, the former ‘Nairobi Diaries’ actress, also insisted that it’s not wrong for women to put a price tag on sex.

“Many times people have misjudged me because I love my men with a little cash, is it my fault that I get men who have money.

The mother of one also set the record straight on rumors that she is pregnant for her Nigerian baby daddy, whom she recently claimed had abandoned her when she refused to abort.

“I am not pregnant again but to be honest, I want a house full of babies. A football club. Yaani I need babies or a rugby team.

“Ningekuwa naweza zaa watoto 12 ningezaa but unfortunately I can only be able to get four and the fourth one will be by God’s grace. So trust me, I’m gonna give you three more babies and no I’m not pregnant with my baby daddy,” she said.