More job losses as troubled local airline, Silverstone Air, fires all staff and crew days after the grounding of its planes. 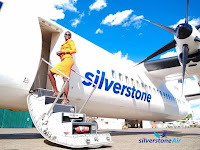 Tuesday, November 19, 2019 - Local airline, Silvertone Air, has sacked all its staff and crew days its planes were grounded by the Kenya Civil Aviation Authority (KCAA)

The troubled airline told their staff that the decision by KCAA to ground its Dash 8 fleet of planes had cost them losses due to flight disruptions.

"Silverstone Air Services Limited has become redundant... as a result of the recent decision by KCAA to ground the company's fleet, thereby grounding our passenger services," part of the statement read.

"This has resulted in irreparable damage to the company's brand equity as evidenced by mass cancellation of tickets."
“This letter serves as notice of redundancy, taking into account your notice period of one month as per your contract of employment."

"This Notice is effective November 18,” said Silverstone Air” it continued.

The Airline’s planes were grounded for 7 days to allow for inspection after a series of mishaps.

On October 28th, there was panic after one of the rear wheels of a plane belonging to Silverstone Air fell off as the plane took off from Lodwar Airstrip in Turkana County.

KCAA Director General, Gilbert Kibe, said that Silverstone cannot fly until they establish what led to the fall of a wheel from one of their planes.