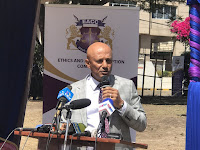 Tuesday November 19, 2019 - The Ethics and Anti-Corruption Commission (EACC) released results of a survey on corruption in the Kenyan government on Tuesday where it declared the Fred Matiang’i-led Minister of Interior as the most corrupt institution in Kenya.

According to the EACC report, the Government department which receives the highest number of bribes is the Registrar of Persons with a score of 19.9% of all bribes given by Kenyans.

The Registrar of Persons falls under the Immigration Department within the Ministry of Interior and Coordination of Government.
The department is charged with issuing birth certificates, national identity cards among other roles.

Public Hospitals emerged number two with 19.7% of the Kenyans polled reporting that they had given bribes to receive services in public hospitals.

The third ranking corrupt body was the police.

17.2% of those polled reported that they had given bribes to regular police.

Also with a score above 15% was the local chief's office or a village elder who were ranked as the fourth most corrupt Government officials having received bribes from 16% of the Kenyans polled.

The EACC survey found that the average amount of a bribe in Kenya stood at Sh3,833.14."