Male supervisor caught on CCTV beating up a LADY cashier at a supermarket in Kajiado like a stray dog - DCI arrest this animal (VIDEO).

0 Entertainment News, Gossip and Drama, Videos 05:07
A+ A-
Print Email

Friday, November 22, 2019 - Kenyans on twitter have called for the arrest of a male supervisor who was caught on CCTV assaulting a lady cashier at Eastmart Supermarket in Kajiado town.

CCTV footage shared online shows the violent supervisor raining kicks and blows on the helpless lady.
Initially, the violent man was believed to be a customer but it later emerged that he is a supervisor at the supermarket.

A concerned Kenyan shared the CCTV footage and called for the arrest of the shameless man.

This CCTV video shows a customer (male) repeatedly beat up a supermarket cashier at Eastmart in Kajiado town. We can't tolerate such Violence in this country any more. @DCI_Kenya & @NPSOfficial_KE please intervene and have the guy apprehended. pic.twitter.com/U7YiJ2wWSJ
— BRAVIN™ (@BravinYuri) November 22, 2019 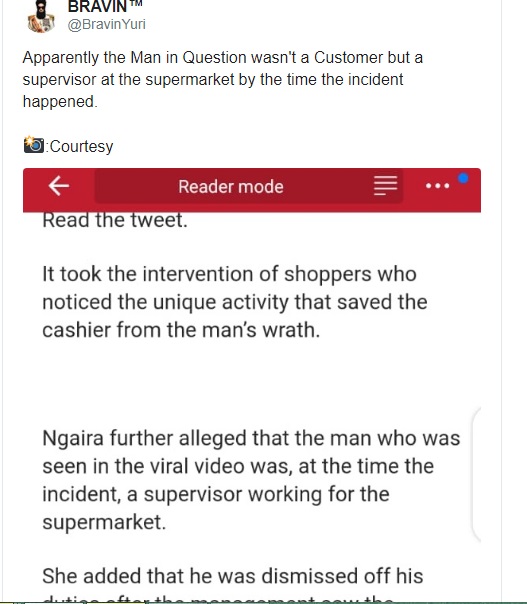