Kikuyus will shock many in 2022 now that they are the majority according to 2019 census! They will dictate who becomes President-ISAAC MWAURA now says 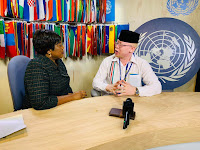 Tuesday November 5, 2019-Nominated Senator Isaac Mwaura has told Kenyans not to bank on the current division between Mt. Kenya region, saying that things will soon be different and the region will shock many in 2022.

This is even as Mt. Kenya is currently divided between the Tangatanga and Kieleweke factions, which has been seen to be a great danger to the region voting together in 2022.

But according to Mwaura, the region will shock Kenyans in 2022 because that all the current hard stands will slowly fade enabling the region to once again vote as a block.

He noted now that the region is leading in numbers as per the 2019 census results, it will also play a major role in the 2022 polls and must be in government.

"We are currently appearing divided but we will ultimately come together.”

“Kenyans will be surprised.”

Mwaura made the remarks on Radio Maisha on Tuesday morning, hosted by Billy Miya.