Kenyan, DAVID NJUGUNA, to serve 5-7 years in US jail for killing a police officer while high on Marijuana (PHOTOs)

Friday, November 22, 2019 - A Kenyan residing in Massachusetts, US, was sentenced on Thursday to 5-7 years in prison for causing the death of a State Police Trooper in March 2016 in an accident.

The prosecutors said that Njuguna was speeding when he crashed into the back of the victim’s parked cruiser on March 16, 2016.

They also said marijuana was found in his car and his blood samples taken an hour after the crash contained THC (the main psychoactive compound in marijuana that gives the high sensation)
In his defense, Njuguna claimed that he suffered a seizure while behind the wheel.

However, Worcester County District Attorney insisted that the 33-year-old was high on marijuana and driving recklessly in the moments before the accident.

In her ruling, Judge Janet Kenton-Walker noted that the crash that killed Thomas was caused by Njuguna’s intentional reckless driving.

Judge Janet Kenton-Walker opted to sentence Njuguna to 5-7 years instead.

She also cleared Njuguna of OUI manslaughter and felony motor vehicle homicide because prosecutors did not prove he was high. 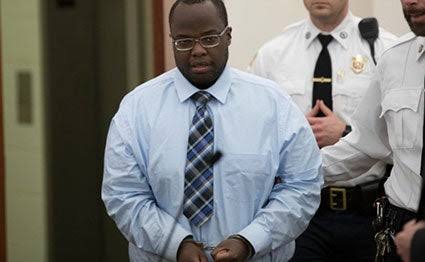