JOWIE confused MARIBE with a good dick - She was paying rent, buying food and feeding him like a toddler 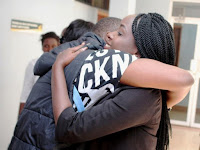 This is after Maribe’s househelp testified in court during the ongoing murder case, where Jowie is accused of masterminding the murder of late businesswoman, Monica Kimani.

Apart from telling the court that Jowie used to sleep all day after dropping Jacque Maribe at work, the househelp also revealed that the former Citizen TV reporter is the one who used to buy food and pay rent.
Jowie’s work was to drive her to work and back, sleep all day and then satisfy her in bed - the typical characteristics of a fuck boy.

The househelp also told the court that she had a good relationship with Maribe but Jowie didn’t like her.

“He often got angry at me and would scold me often.”

“At one point, he accused me of stealing money meant for house rent,” she told the court.