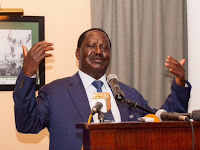 Sunday November 10, 2019 - Orange Democratic Movement (ODM) party leader, Raila Odinga, has said that he cannot apologise to anyone after chaos erupted during Thursday's by-election in Kibra.

This follows Deputy President William Ruto asking him to apologise to Kenyans after ODM goons beat up Jubilee Party leaders who were overseeing the by-election.

"As Kenyans we demand that Tinga/his party unconditionally, unequivocally and publicly renounce the culture of violence, chaos, terror and gangsterism their signature modus operandi as witnessed in Kibra and unreservedly apologise to victims past and present for their hurt and loss,"Ruto said.
However, Raila Odinga through his spokesman, Dennis Onyango, poured scorn on these sentiments and accused Ruto of suffering from hangover following Jubilee's defeat in the Kibra polls.

"After the resounding victory in the Thursday Kibra elections, ODM and its leadership are moving forward to other important battles for the good of Kenya."

"We leave it to losers like Ruto’s Jubilee wing to curse, analyse and cry over Kibra."

"We have vacated that past to losers," Onyango said.