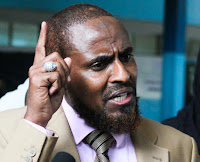 Friday November 29, 2019-Former Presidential candidate, Mwalimu Mohammed Abduba Dida, has spoken about an incident at the Bomas of Kenya on Wednesday where Deputy President William Ruto was locked out of a secret meeting between President Uhuru Kenyatta and his former political nemesis Raila Odinga.

Dr Ruto, who is second in command, was spotted outside the VVIP chamber where the two were meeting.

Now Dida has spoken about the incident that has been labelled by many Kenyans as childish and uncouth.

“Deliberate public mistreatment and humiliation of the deputy president. I wish he had just skipped the event like most of us. I am not a fan of him but he is still the DP, corrupt or not. Terrible! Terrible!” Mwalimu Dida stated.

Some Kenyans mostly from Mt Kenya region have ridiculed the President for embarrassing the man who made him the president in 2013 and 2017.