Here is the man that UHURU wants to replace CJ MARAGA – The CJ's goose is cooked and MATIANGI is in the mix, he is going home! 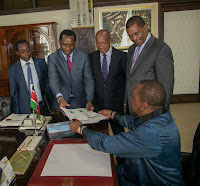 Wednesday November 6, 2019 - Chief Justice David Maraga’s job as the President of the Judiciary is at stake if what is happening at State House is anything to go by.

Early this week, Maraga, in unusual gesture, went public and confirmed to the nation through a televised address of an alleged plot by the Executive to kick him out of office before the end of the year.

According to impeccable sources, Uhuru wants Solicitor General, Ken Ogeto, to replace Maraga who is accused of abetting corruption in the Judiciary.
Uhuru argued that the Judiciary under the leadership of Maraga has become a den of corruption and the President wants a new team in the Judiciary in order to secure his corrupt free legacy.

The decision to settle on Ogeto, who is a Kisii, as the best replacement for troubled Maraga is understandably to retain the docket in the Gusii region.

Ogeto was part of President Kenyatta’s legal team during the ICC trials and his appointment as the Solicitor General immediately Uhuru assumed Presidency for the second term was part of a process to groom him for the CJ post.