God will never forgive MATIANGI and KARANJA KIBICHO if they go to heaven, see the draconian order they have issued to police – Are they joking with God? 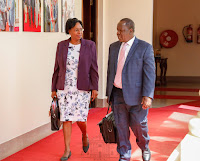 Thursday November 21, 2019 – The Interior Ministry has banned all police officers from preaching the gospel of Jesus Christ in police uniforms.

In a memo shared by Deputy Inspector General of Police, Edward Njoroge Mbugua, the police were ordered not to preach the good news in police attire.

Mbugua said unless within a police institution like colleges, it is unlawful for any police officer to preach donned in work uniform.

"Officers are encouraged to separate official duties and private engagement and act appropriately," Mbugua said.
A number of officers have been caught on video preaching in market places while others are engaged in official gospel music production.

Mr. Mbugua's directive comes just a week after his contract was extended by President Uhuru Kenyatta, despite succession battles being witnessed in his docket.

He ordered that those involved in preaching can, however, don in official uniforms when presiding over services at police colleges or functions organized by the police service.

Interior CS, Fred Matiangi and his Principal Secretary, Karanja Kibicho, are said to be the men behind the unpopular move.