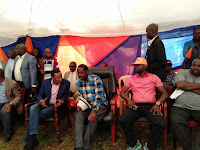 Mutua was there to express his support for Imran Okoth, ODM's candidate in the Kibra parliamentary race.

The meeting comes just days to the Kibra by-election that will be held next week on Thursday 7, November, 2017.

Dr Mutua's support is a shot in the arm to Imran Okoth who is seeking the backing of the KIbra residents to be the next member of parliament of the constituency.

Mutua is in a power struggle with Wiper leader Kalonzo Musyoka for the Kamba nation''s support as both are expected to gun for the presidency in 2022.

Kalonzo Musyoka has avoided the Imran Okoth campaign and the presence of Governor Mutua at an event in support of the ODM candidate is seen as the county boss' challenge to Kalonzo Musyoka.

The Kibra seat fell vacant after the death of former MP, the late Ken Okoth, who succumbed to a run with cancer at a Nairobi hospital.