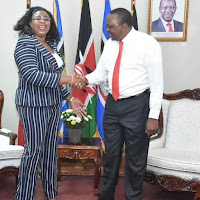 Wednesday November 20, 2019 - Embattled Malindi MP, Aisha Jumwa, has a bone to pick with President Uhuru Kenyatta over his recent appointment.

This follows the nomination of Margaret Nyakang'o as the new Controller of Budget.

Speaking on Wednesday, Jumwa noted that the appointment was supposed to be given to someone from the Coast region, noting that one of their own, Stephen Masha, applied for the position, after holding it in an acting capacity.

"We are being excluded instead of being included in the Government with such positions like this one, which would have been held by Stephen Masha.”

"He held the position in an acting capacity and is a professional.”

“However, it has slipped from our grasp into another community," Jumwa lamented.

She further stated that she was demoralised and disappointed.

She asked to meet President Kenyatta in person to address the matter.

"I request Kenyatta, despite the fact the handshake exists, to remember us as we are being pushed further down the pecking order.”

"We want him to listen to our pleas as Mijikenda leaders.”

“The same way he gave an ear to our Mt Kenya compatriots.”

“We would like to express how we have been neglected," Jumwa urged.