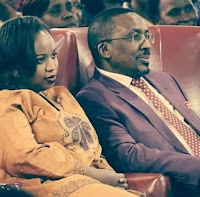 Tuesday November 20, 2019 - Controversial Pastor James Ng'ang'a of the Neno Evangelism Centre has recounted a series of misfortunes that befell him since the death of his wife.

In a preaching session published online by his Sasa TV on Saturday, November 16, the controversial pastor narrated a period where he was struck by several successive tragedies.

While giving a bible reference of different seasons, Ng'ang'a opened up to his flock about a season that saw him count loses among them his wife.

"Since my wife died, I went through a trying season," he began.
He went on to painfully narrate how a crusade he held in Uhuru Park went south after the congregation suffered a grenade attack which resulted in 6 deaths and 104 injuries.

"During the same period, we held a Crusade in Uhuru Park and were bombed there, no one has ever gone back."

"We all went silent," Ng'ang'a recalled.

After the incident, the rogue pastor disclosed that his church was demolished and his spouse would later lose her life.

"The municipal tractor came and demolished my church, my wife passed on, we had one court case after another," he narrated.

Ng'ang'a's Neno Evangelism Centre along Haile Selassie Avenue in Nairobi was demolished in June 2011 exactly one year after the Uhuru Park incident.

It was later rebuilt on Pumwani Road in Nairobi and has since given rise to several branches in the country.

Even though the cause of his wife's death remains a mystery, Ng’ang’a later remarried Mercy Murungi in 2012.