Drama as PASTOR fakes death, brainwashed congregants ordered to splash money on his body so that he can resurrect (VIDEO)

0 Entertainment News, Gossip and Drama, Videos 04:37
A+ A-
Print Email 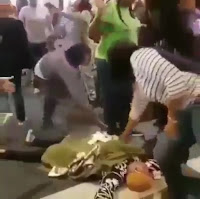 Thursday, November 28, 2019 - A rogue pastor is smiling all the way to the bank after he faked death and instructed his assistants to tell the brainwashed congregants that he will resurrect if they give him enough money.

His body was put on the pulpit and the congregants ordered to splash money on it, so that he can come back to life.

Of course he was not dead but the foolish congregants almost caused a stampede while rushing to the pulpit to splash money on the body, expecting him to resurrect.

The rogue pastor must have made a lot of money through that stunt.
Watch the video.
The Kenyan DAILY POST