Don’t take UHURU seriously! He was joking when he said he wants to be Prime Minister in 2022 just to please RAILA - FRANCIS KIMEMIA sets record straight 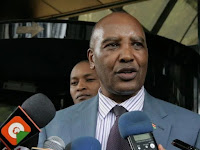 Monday November 18, 2019 - Nyandarua Governor Francis Kimemia has sought to set the record straight on claims that President Uhuru Kenyatta would be willing to remain in power after his tenure ends in 2022.

Kimemia now says that Uhuru was merely joking, and never meant what he said, adding that it is people that have taken his light remarks too seriously.

"I don't remember him saying that.”

“It is people saying that and it was in a light touch," he said in an interview.

Speaking during a meeting with Mt. Kenya leaders at Sagana State Lodge on Friday, Uhuru admitted to having knowledge on claims that he is keen on having constitutional amendments to prolong his political career and stay in power.

Uhuru noted that he wouldn't mind being the Prime Minister under the dispensation of a new Constitution.
“I do not know the contents of the BBI report yet.”

“I wouldn’t mind being in leadership in such a post, though let us deal with the current situation first," he said.

He urged politicians to support the report set to be tabled before him by the Building Bridges Initiative (BBI), formed by him and ODM boss Raila Odinga in 2018.

Uhuru and Raila have said that the proposals made by the task force will go a long way in healing the nation, by eradicating the culture of post-election wrangles.