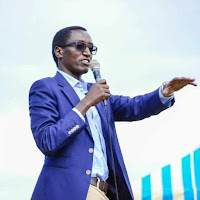 Through his Twitter handle, Buzeki on Sunday said that Imran is fit to take over from his late brother the late Ken Okoth.

According to the Eldoret-based business mogul, the ODM candidate was in charge of Kibra when Ken Okoth was receiving treatment abroad before he succumbed to cancer in July this year.

Buzeki, who a few months decamped to Chama Cha Mashinani, was once a Jubilee party member before he fell out with with Deputy President William Ruto.