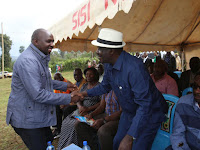 According to Murkomen, Raila must apologise over the violence that occurred during the Kibra parliamentary by-election that was held on November 7.

In a tweet on Friday, the Elgeyo Marakwet Senator said BBI, which was formed following the March 9, 2018 handshake between Uhuru and Raila, will be 'another exercise founded on hypocrisy' if the latter does not say sorry over Kibra chaos.

"Before receiving the BBI report on Tuesday, I am hoping the former PM will have issued a public apology for presiding over and/or acquiescing in the Kibra violence. Failure to do so will make BBI another exercise founded on hypocrisy. He must lead by example not mere lip service," Murkomen posted.

Allies of Deputy President William Ruto have been accusing ODM of having employed violence to ensure its candidate Imran Okoth won the race.

Ruto has also asked Raila to apologise to victims of Kibra chaos and also renounce 'culture of violence'.

"As Kenyans we demand that Tinga/his party unconditionally, unequivocally and publicly RENOUNCE the culture of violence, chaos, terror and gangsterism their signature modus operandi as witnessed in Kibra and unreservedly apologise to victims past and present for their hurt and loss," the DP said in a past tweet.