Appoint these judges at your own peril! NIS now warns UHURU as it blacklists 4 judges - You won’t believe what they have been doing in secret 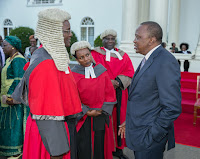 Thursday November 7, 2019 - The National Intelligence Service has blacklisted four High Court judges that Chief Justice David Maraga had forwarded to President Uhuru Kenyatta for promotion to the Court of Appeal.

The four are said to be at the heart of the standoff between the Executive and the Judiciary.

Reports indicate that Justices Joel Ngugi, Aggrey Muchelule, Mumbi Ngugi and Francis Tuiyott are among the 12 candidates (nine judges and three lawyers) that the NIS blacklisted on July 5, 2019, without providing any supporting documentation.
However, the spy agency, led by Major General Philip Kameru, cleared 23 other candidates for interviews.

Efforts by the Judicial Service Commission Secretary, Anne Amadi, to seek more information from NIS as to why the judges were blacklisted bore no fruits as Kameru himself told the JSC that the agency was not willing to share the information on why they had barred the 12 candidates.

According to the JSC, the move came as a surprise to them as they claimed to have followed the due process in the recruitment of the candidates including seeking clearance from the EACC and KRA.

It further claimed that the duty of the President in the hiring of Judges was merely ceremonial and malaise the appointment of persons nominated by the JSC.

The Head of Public Service, Joseph Kinyua, wrote to the JSC stating that the President had adverse reports against some of the candidates.