All that JOWIE ever did was to take MARIBE to work, come back home and sleep all day - Househelp embarrasses him in court 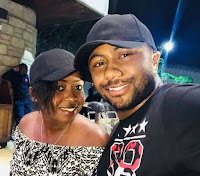 Thursday, November 28, 2019 - The househelp to embattled TV journalist, Jacque Maribe, testified in court during the ongoing murder case and revealed that Joseph Irungu alias Jowie, the main suspect in the murder of the late businessman, Monica Kimani, used to sleep all day after taking his ex-lover, Jacque Maribe, to work.

The househelp who is identified as Paemla Kembo, told the court that after dropping Maribe to work using her car, Jowie would routinely return to the house to sleep and pick her from work later in the evening.

Jowie, who was a jobless male socialite masquerading as a security expert, moved into Maribe’s house in Lang’ata after they started dating.

He was previously sharing a one bedroom house in Buru Buru with his friends, believed to be criminals and male socialites who prey on rich women.

“All he did was to take Maribe to work and come back to sleep.”

“On September 19, he took Jacque to work and came back to sleep," Kembo, who was working for former Citizen TV business reporter, Terry Anne Chebet, before Maribe employed her  told the court.

The househelp further told the court that Maribe told her that Jowie was an army officer who worked in Dubai before being employed at State House.

She also narrated to court how she used to live in fear because Jowie was in possession of a gun.