We don't do septic tanks, beat our men or chop off their manhood anymore-Nyeri MP RAHAB MUKAMI now begs to marry them after the killing of TOB COHEN 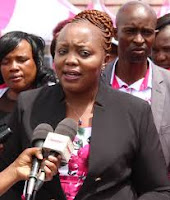 Addressing a crowd at Tharaka Nithi County, the lawmaker pleaded with men to marry ladies from Nyeri instead of sourcing wives from outside.

Rahab claimed Nyeri women no longer hit their husbands and are now kind and hardworking women.

She acknowledged the age old stereotype that stated women from Nyeri are hot-tempered and physically abuse their husbands whenever their men do not toe the line.

The MP assured men that women from the area make good wives and are not as violent as most people paint them out to be.

Apparently, sometimes most allegations are simply a case of misunderstandings.

"Sometimes a man comes home after gallivanting and drinking then he falls and hits himself on the door post. The wife rushes out to pick him and she ends up being accused of injuring him," Rahab said.

The woman rep was convinced women from her county wake up early to toil and provide for their families.

She also noted the scourge of alcoholism was rampant among men from her area.

"There are Nyeri women here and please do not associate us with husband battering. If you look at me can you not tell that I am a worthy woman?" she added.