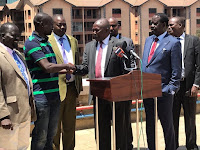 Wednesday October 30, 2019-Nominated Member of Parliament Maina Kamanda has insinuated that President Uhuru Kenyatta is in support of the ODM candidate in the Kibra by-election.

He noted that Uhuru personally asked him to represent him in Imran’s campaigns.

“When you see me here, know that President Uhuru Kenyatta is here.”

“On November 7, please come out in large numbers to vote for Imran.”

“Imran’s victory will be a win for the unity of this country,” he said.

Kamanda added that he will not stop campaigning for Imran despite the attacks he has been facing from fellow Jubilee members.

He vowed to stick with Imran, adding that he will be on standby to celebrate his win after the November 7 mini poll.

"Come November 8, I will be celebrating in Kibra with these people who are gathered here,” he added.

Uhuru has been appearing noncommittal on Jubilee candidate, McDonald Mariga's bid and has not been seen campaigning for him, while Raila has been seen drumming up support for Imran.