TANA RIVER!! The father was caught red handed romping with the daughter by his sister-in-law 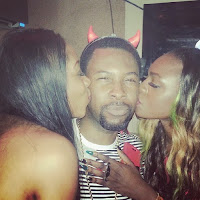