Shock on RUTO as TUJU also withdraws from Kibra campaigns-No one can blackmail or force me to campaign for MARIGA; not even the DP 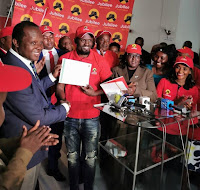 Wednesday October 9, 2019-It appears that Jubilee Party is on the verge of collapsing over the hotly contested Kibra by-election.

This is after Secretary General of Jubilee, Raphael Tuju, withdrew from Kibra campaigns, citing blackmail on the part of Deputy President William Ruto.

Tuju maintained that no one should force him to campaign for McDonald Mariga in Kibra.
Speaking on Tuesday during an interview on Citizen TV, Tuju said he will treat the Kibra by-election like he has always done with all other by-elections.

"There have been so many other by-elections and I have never been to any of them. If anybody insists that they want to see me in Kibra, I will consider it ethnic profiling," Tuju said.

As to whether he will campaign for him in future, Tuju said he has already campaigned for Mariga before.

"I have already campaigned for him the other day I was with him at State House when he was being received by the President. I personally, (Something which I don't normally do). I personally gave him the clearance certificate for the party. ," he said.

He affirmed that Mariga is Jubilee's candidate in the upcoming poll, adding that Mariga will get financial assistance from the party.