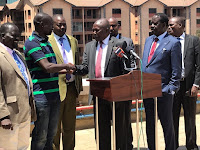 According to Mwaura, the two, both having lost in the previous polls, are out to endear themselves to Raila's supporters ahead of the 2022 polls.

He said that Kamanda needs the backing of Raila's supporters in Starehe, as is the case with Shebesh who lost her Woman Representative seat to ODM's Esther Passaris in 2017.

However, he warned Raila and his supporters against thinking that the backing will earn him support in Mt Kenya region, where both leaders hail from.

He noted that Raila will have it hard being accepted in Central Kenya, a region he has always been at war with throughout his political life, except in the 2002 polls.

Kamanda and Shebesh have thrown their weight behind ODM's Imran Okoth in the Kibra by-election.