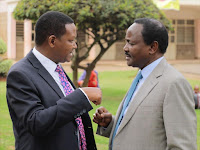 Wednesday October 23, 2019-Accusations and counter-accusations have reportedly started to plague Wiper Party after its choice candidate for the Mutonguni Ward by-election was trounced by a candidate fronted by the Machakos Governor Alfred Mutua.
Wiper leader Kalonzo Musyoka, who is widely considered the kingpin of Ukambani politics, was expected to carry the day, but instead, Mutua emerged victorious.

Addressing a past event, Mwingi West MP Charles Nguna claimed that the party had warned Kalonzo against participating in Mutonguni Ward by-election campaigns.

He noted that the members of Wiper had raised the concern that Stephen Kithuka was a weak candidate against MCC's Musee Mati.

Nguna personally requested Kalonzo to steer clear of the campaign trail to avoid backlash, but the advice was ignored.

He pointed fingers at  Kitui West MP Edith Nyenze and Kitui Senator Enoch Wambua, whom he accused of misleading Kalonzo that his involvement in the campaign would lure more voters.

Mwingi Central legislator Gideon Mulyungi agreed with Nguna, admitting that the party had made a few miscalculations that led to the humiliating defeat.

"It is a big shame and a slap in the face. We must get back to the drawing board and correct our mistakes," he stated.