RUTO’s deep pockets force RAILA to turn to MPs and beg them to contribute 50,000 each to help IMRAN recapture Kibra seat - It is now obvious Baba has panicked 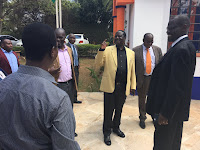 Wednesday October 2, 2019 - The upcoming Kibra by-election is proving challenging for former Prime Minister Raila Odinga and his ODM party, especially after it became apparent that they would be going against Jubilee’s McDonald Mariga, who is being bankrolled by the wealthy Deputy President William Ruto.

This forced Raila to call for an urgent ODM’s Parliamentary Group Meeting in Parliament, where he asked the MPs to take up their positions in the Kibra poll battlefront in support of their candidate, Imran Okoth.

During the meeting, the MPs also agreed to contribute at least Sh 50,000 each for the campaigns, ahead of a funds drive to be held today at a Nairobi hotel.

“The meeting was majorly about the Kibra campaigns.”

“We want to involve the MPs.”

“We have agreed on a certain amount, but we have said they can contribute as much as they can,” Mr Mohamed said.

Imran has continued to get support from rival camps.