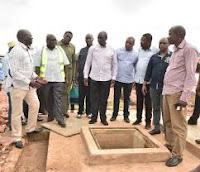 Wednesday October 2, 2019-Deputy President William Ruto came out guns blazing to defend himself after accusations that he had rushed to launch a project that was yet to be fully completed.

While urging his critics to stop politicizing everything, Ruto noted that 15 percent of the project had already been completed and that there was nothing wrong in him launching the project.

"The launched lower Nzoia Flood Mitigation & Irrigation project is now 15% in progress and is meant to eliminate destructive perennial flooding and increase acreage under irrigation," he wrote on his Twitter page.

Further, he noted that he had followed through the project since 2008 when he was the Minister for agriculture.

Water and Sanitation Principal Secretary Joseph Irungu, had told the Parliamentary committee that the irrigation project was launched without the blessings of his office.

He added that his office was still addressing issues concerning the compensation of residents who had been displaced.

"There was no contact between the DP's office and my office. Even my project engineer was not there. Compensation is a very sensitive matter, which needed to be handled well," Irungu stated.

The irrigation project was supposed to mitigate flooding common in the area and also to boost food production in the region.