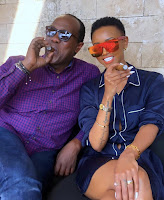 Hussein joined Citizen TV as an intern in 2009 before rising up the ranks to become one of the most sought after TV journalists in the country.

Soon after he finished interviewing Murkomen and John Mbadi on his last show, his colleagues surprised him with a cake and showered him with praises, describing him as an illustrious journalist who has made a mark in the media industry.

Top politicians led by former Prime Minister, Raila Odinga, also sent messages of goodwill to Hussein and wished him the best in his next assignment.

Popular TV host and former CNN reporter, Jeff Koinange, was among senior journalists who showered Hussein with praises, describing him as the best of the best.

“You are the best of the best and we wish you all our luck and we will be with you and if you plan to come back anytime, you will be welcome."

"This is your home and we will miss you,” Koinange said.