PESA OTAS!! What JALANG’O dished out to his wife’s family during dowry payment over the weekend 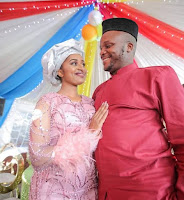 Just hilarious; something to make your day here.

What you didn't know about MZEE JALANG'O MWENYEWE.

Felix Odiwuor popularly known as Jalang'o is an International emcee, an entertainer, a radio show host and CEO at ARENA MEDIA, an event organising company based in Kenya.

He was born and raised in Homabay and Western parts of Kenya.

He owns a palatial home in his native-land Siaya worth 5Million and another home in Nairobi worth 10Million.

He owns a fleet of automobiles, a Bently worth 18M, a Range rover overfinch worth 20M, a BMW X6 and a Landrover Discovery (both red in colour).
Jalang'o got married to Kalenjin lady and a media personality, Cheptoek Boyo and they were blessed with a baby girl. After sometime things didn't work out for the two and they seperated which led to Jalang'o becoming a single dad for quite a long period.

Jalang'o later met Amina Chao(his current wife) fell in love and they have been blessed with two daughters Salika and Amani.

On saturday, October 26th, 2019 Jalang'o conducted a traditional wedding where the dowry comprised;