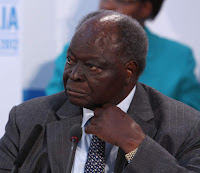 Thursday October 31, 2019 - Former President Mwai Kibaki's family has moved to clarify nes about the health condition of the former Head of State.

In a statement to Kenyans, Kibaki's private secretary, Ngari Gituku, denied reports that the ex-president had been admitted to hospital.

Ngari further stated that Kibaki's visit to Nairobi Hospital on Monday was only a routine check-up.

“It was a normal visit and there is nothing new,” Gituku said.

This came after allegations that Kibaki had been rushed to Nairobi Hospital days after he returned from treatment in London.

Reports claimed that the 88-year-old had suffered pain in the knee that caused him to seek medical attention.

Kibaki has been battling a recurrent knee problem after sustaining an injury in a road crash in Machakos in 2002, however, Gituku could not confirm if it was the reason for the latest visit.

“At his age and stature, they can check anything (during routine medical trips), including the hair follicle, the prostrate and eyesight,” he added.