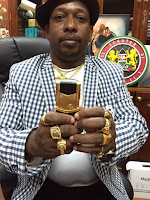 Thursday October 31, 2019-Nairobi Governor Mike Sonko has vowed to deal ruthlessly with cartels in his government.

Venting on social media, Sonko exposed a firm that had colluded with Evans Kidero’s regime to siphon public funds.

He said Proland Limited, which is owned by one Fredrick Mungai, was given consent to pocket Sh35 million for doing nothing only to emerge that it was actually paid Sh50 million at the end of the day.

"The cartels are back again at City Hall. PROLAND Ltd owned by a Mr Fredrick Mungai recorded a consent with Nairobi County Gov't during the previous administration to be paid Sh35m for supplying hot air.”

“They were paid over Sh50m during the previous regime for supplying air," he tweeted.

The governor also claimed that the firm has been operating behind scenes and it has already received Sh175 million without his consent.

He affirmed that he will take stiff action against officers behind the saga with immediate effect.

"Now they're back with plain cloth Police officers at our Finance offices to force us to pay more millions at the expense of taxpayer’s money.”

“So far they've been paid Sh175m without supplying anything. But as long as I'm the Governor, I won't allow cartels to steal County funds," he said.