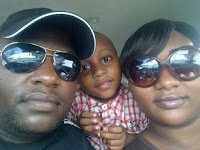 Monday, October 7, 2019 - The late Miriam Kighenda’s husband has revealed how he broke the sad news of the Likoni Ferry tragedy that claimed the lives of his wife and daughter to his 9 year old son last Friday.

Miriam’s husband has been lying to his son on the whereabouts of his mother and sister but on Friday, he broke the sad news to the little boy and showed him photos of the tragic accident.

Ever since he broke the news to the boy, he has not stopped crying.

The traumatized boy keeps on checking the photos of the ferry tragedy that have been widely circulated online.

“I broke the news to my son on Friday and since then, it has been tough for him.”

“It’s a healing process.” Wambua, who is an Operations Manager at Almar Containers East Africa said.

The young boy has been going through counseling after his father broke the sad news to him.

On Friday, experts from the Kenya Red Cross visited their residence to counsel him.

The counseling is expected to continue as the 9 year boy starts the healing process.

Mr Wambua says what is keeping him going for now is his faith and prayers from the public.