Is KALONZO considering ex-Mungiki leader MAINA NJENGA as his running mate in the 2022 polls? See what they discussed yesterday at NJENGA’s house 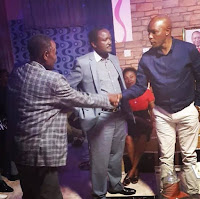 Saturday October 5, 2019-Former Mungiki leader, Maina Njenga, continues to send strong signals to his political competitors in the country ahead of the 2022 polls.

This is after he hosted former Vice President Kalonzo Musyoka at his residence, a move that could cause jitters.

During the meeting, prayers were held as the two leaders retreated to a meeting where they discussed national cohesion and integration ahead of polls.

"I was privileged to be visited by the leader of the Wiper Democratic Movement, Hon Kalonzo Musyoka at my residence. We shared many ideas concerning the leadership of our country Kenya.

"As leaders, we should all embrace together to steer good governance with inclusivity and transparency in serving the wananchi," he said.

Last week, Mr Njenga also held a meeting with Youths and Gender Chief Administrative Secretary Rachael Shebesh at Laikipia along with many youths.

Shebesh, who was criticised after a video of her with Njenga surfaced, insisted that there was nothing wrong with the two meeting, arguing that she's in charge of youths.

"I want to put records straight on a video that has been going around showing me speak to Maina Njenga. I am a minister for youths and many of them came to see me at my residence. We had seven MCAs from Laikipia in that room and my mother.”

"I want to tell people who are being petty that I knew that video was being taken and that's why I was speaking. Radicalisation is a problem. I cannot run away and I have to speak to these youths and educate them on other ways of making a living," Shebesh said.